On a tropical afternoon heavy in anticipation of a monsoon downpour, I sat down with Alain Parizeau at his seaside apartment in Bambalapitiya, Colombo, to drink tea, and hear the story of Simon Blackfoot’s migration to Sri Lanka.

A tale of self discovery with a healthy dose of art, adventure, and magic, Alain’s story starts in Toronto, Canada. As a young artist he co-founded a design studio called Paris Hill. They were successful twenty somethings making shit happen, with a loft space, interns, and a few awards under their belt. However, frustrated that they could never quite make it out of the loft they eventually decided to change direction and open a studio and gallery space in downtown Toronto called Barbershop.

While working on a solo show for Barbershop Alain was invited to paddle the Snake River in the Yukon Territory near the Northwest Territories border. He spent a month wandering in the North where there are no people and the sun never sets, and began having a recurring dream featuring an ancient tribal man walking into the sunset wearing a wolf’s head and carrying a spear. One morning he woke from the dream to discover paw prints circling his tent and the name Blackfoot resonating in his memory. Alain’s middle name is Simon, so he decided to sign his show Simon Blackfoot.

When he was offered a job as program leader at Academy of Design in Colombo, Sri Lanka, Alain was ready for a new beginning. He had a fantasy of re-inventing himself in a place where he knew nobody, and from the moment he got off the plane in Colombo he felt a connection to the raw energy in the humid air. What followed was a period of luck, good fortune, and self discovery.

Shortly after arriving in Sri Lanka he heard about a place called Kataragama. An ancient destination for pilgrims because of three religious sites: an Islamic Mosque, a Buddhist Temple, and a Hindu Mandir. Kataragama is known as a magical place charged with spirituality. It is a difficult place to get to and being new to the local bus system Alain inevitably got lost. Tired and travel weary he finally arrived at his guesthouse hours late to discover that in the confusion he had dropped the sketchbook he had been using since arriving in Sri Lanka. He spent five enlightening days riding around Kataragama on an old bicycle meeting gurus and an assortment of other far out eccentric characters. But, when it came time to leave and his host and now friend asked if he had a good time Alain replied that although it was amazing, he was still upset about losing his sketch book. ‘Don’t worry,’ said his friend, ‘this is a magical place, lets check the bus stand’. There was one bus leaving and they waved it down and asked the driver if he had seen the book, he hadn’t. Disappointed, they were turning to leave when a man popped his head up from behind a seat in the back of the bus waving a book in the air. Alain’s sketch book had traveled to Colombo and back four times and was still on the bus. 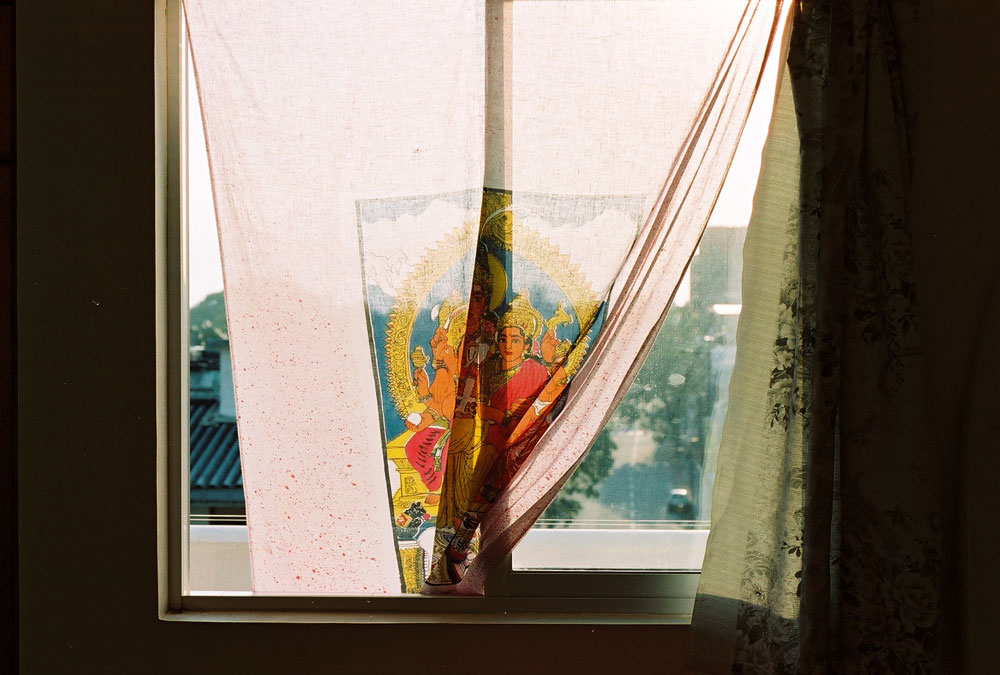 This was a time of very good fortune for Alain and he was beginning to feel that he was taking too much from his new home. When he met fellow artist Aaron Glasson who encouraged him to get out and start painting murals he realised that this was his opportunity to give something back. They started by painting a wall at the top of his street, then a giant mural at a children’s hospital, and Alain began to realise that he could apply the ideas he was teaching in design to interact with his new community through art. They painted a piece in the slums that no one can see except the people who live in the slum. Then there was a tanker which shipwrecked and caused an oil slick off the coast of Sri Lanka so they went to Galle and painted a mural to raise awareness. 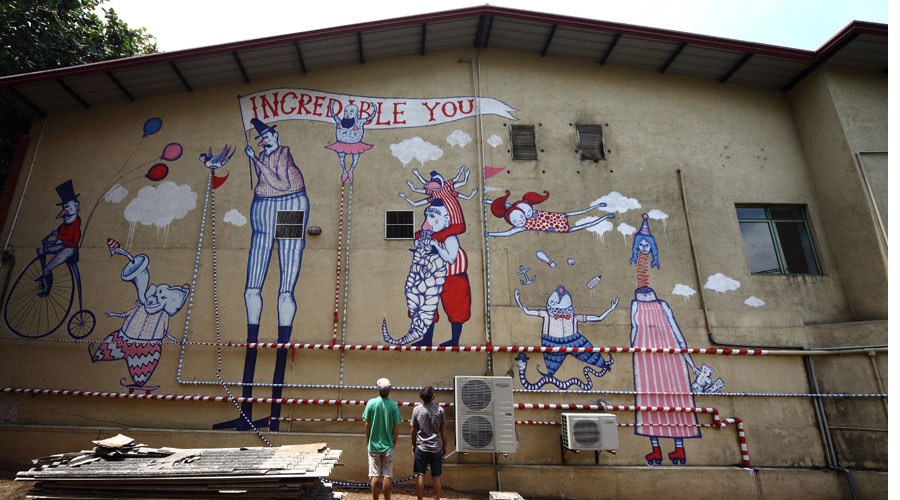 Sitting across from Alain admiring his ability to wear a lungi with the casual poise of a tuk tuk driver taking an afternoon nap, I struggle to imagine meeting him in any other context, and it strikes me that this is a man who has found home in a foreign culture. Now that the honey moon is over, he says that he loves Sri Lanka but can see the potential for change and improvement. Art has become a channel to help influence and engage with the community of his new home.

To creatives interested in visiting Colombo his advice is that to connect with the art scene you will need to be patient and hangout in the city for a while. It will take time to dig under the surface. But the city is covered in blank walls and if you are willing to get out and paint, and are careful not paint religious or offensive subjects, the locals will love and embrace it.